With support from Camden Council, we can now confirm that a Christmas Community Market will be held on Saturday 11th December from 11am - 3.30pm on West End Green, West Hampstead. The aim of the event is to provide a festive focus in the West Hampstead community as well as providing support for local shops and crafts people to sell their wares. . Local shops on West End Lane and Mill Lane will also be encouraged to support the Market, either by having a stall or by providing special festive promotions on the day.

The event is being organised by a small group of local businesses and enthusiasts who would welcome other volunteers to help with the organisation and promotion of the event. This would provide an excellent opportunity for people to gain skills in event organising and who wanted to work in marketing or public relations.

To register your interest, either as a stall holder or volunteer organiser, please email westhampsteadxmasmarket@gmail.com.

BOOK THE DATE IN YOUR DIARY NOW AND SUPPORT OUR LOCAL BUSINESSES AND COMMUNITY!
Posted by Gillian Risso-Gill at Saturday, October 30, 2010 No comments: 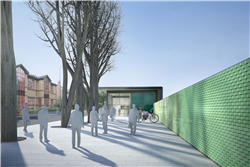 This week Network Rail and Camden's Culture and Environment Department held a very helpful briefing for local councillors and residents' groups (WHAT, LCG and CRASH) about progress with the new Thameslink Station on Iverson Road and Camden's associated improvements in Iverson Road and West End Lane. First Capital Connect representatives were also on hand to field questions, and as Georgia Graham from the Ham and  High was there too, I'm sure we can expect a good piece on this in Thursday's edition.

The first things to say is that the new Thameslink station (image above is from Network Rail's website) isn't scheduled to be completed until December next year, as some pretty difficult engineering is involved, although further work has now started with the final section of the new bridge finally in place.

Camden's work on the adjoining part of Iverson Road, which will make it easier for passengers to cross the road well away from the junction, should be completed in a couple of weeks' time.

As I've already written here, Camden's improvements to the pavements in West End Lane between Sumatra Road and Broadhurst gardens won't start until after Christmas to give us all a breather from roadworks, but I fear it will be pretty disruptive when they do start.

Network Rail explained the various changes that have been made to the new station design since it was first improved, including changes to the new wall running from the station to the corner with West End Lane. It's all about saving money of course, but I think the general verdict was "it's disappointing in some respects, but we can live with it". The most exciting aspect of the whole plan is the way the pavement on the north side of Iverson Road between the new station and West End Lane will be dramatically widened, with the trees in the middle of the pavements rather than tucked away behind a rather grotty fence as at present.

And the demolition of the two buildings on the corner (formerly Joule - and before that Diana Frost's antique shop - and the kebab shop) while a sad loss to the local streetscape will make that corner far safer.

In short, there's still a lot more to be done, including a lot more disruption at various points, which none of us will welcome, but it should all be worth it in the end.
Posted by Keith Moffitt at Tuesday, October 26, 2010 3 comments:

Some readers will have followed the saga of naming three footpaths in West Hampstead over the last year, resulting in the Billy Fury Way signs being stolen by souvenir hunters on three occasions.
Well the latest version of the sign is so high up the wall only the most intrepid will try to remove that one - but that is NOT a challenge!
The new challenge for me is to find a way of officially naming the footpath and bridge which connects Blackburn Road and Broadhurst Gardens. Several times since being elected in 2002 I have had the graffiti painted over and the lighting restored. Network Rail own the bridge although in more recent times they have disputed this. Transport for London shake their heads too, so Camden Council officers have found ways of getting clear ups done because the railway authorities are clearly reluctant to take responsibility. The latest clean up took place last weekend.
I have known for some time that the bridge itself has been called "Granny Drippen Steps" by long-standing locals. My Liberal Democrat colleague Flick Rea has confirmed that the name "Granny Drippen" refers to the flower-seller who had a stall at one end of the bridge selling her produce to commuters. If readers of this blog can tell me in which decade Granny Drippen was operating and at which end of the bridge the stall was located that will help me build up the case for getting the bridge officially named.
My further challenge is to comply with the overly bureaucratic process that I need to follow to get the name secured. I am informed that the option of THREE names has to put forward to the Fire Brigade in the first instance to see if there are any objections from them. (I know this might see strange but they have a veto..) Once that hurdle is complete we then have to consult people locally. One suggestion I know will be vetoed would be Billy Fury Steps, because we cannot have two paths with similar names, and in these straightened times we cannot afford to waste money on more souvenirs prised off walls...
So if anyone has a suggestion for an alternative to the obvious first choice please let me know.
Posted by John Bryant at Saturday, October 09, 2010 1 comment:

I've just heard that Thames Water will be doing work this weekend (Friday 8 October to Sunday 10 October) on Finchley Road by Burrard Road. The works are to repair a water main.

Here's what it will involve:

· Finchley Road will be reduced from three lanes to one lane southbound, between Weech Road and Croft Way

· No right turn into Finchley Road from Burrard Road

· No right turn from Finchley Road into Burrard Road

· The pedestrian crossing will be closed

Apparently the works will be going on 24/24 to get everything completed on time.
Posted by Keith Moffitt at Thursday, October 07, 2010 No comments:

I see that the proposal to build a new development combining workspace with accommodation for 350 students on the site of the old Mercedes garage on Blackburn Road has been allowed by the national planning inspector – Camden’s planning committee turned it down a few months ago.

The main concern of some local residents at the time was the fact that the building goes up to nine storeys in parts which is pretty high for that part of West Hampstead, although as it’s set back from West End Lane and next to the railway line the visual impact won’t be as great as it might be otherwise.

Those of you who regularly walk down Blackburn Road on your way to the O2 centre may well think that anything that bring this rather barren area alive and makes it feel safer will be welcome. The arrival of nearly 350 students in West Hampstead will certainly have an impact - including extra trade for the area's businesses.
Posted by Keith Moffitt at Monday, October 04, 2010 3 comments: