We now have "step-free access" - which pretty much means lifts - at West Hampstead Thameslink station, and lifts are planned for the Overground station in 2014 or some time after that depending on the development of the "Ballymore site" on West End Lane.

Caroline Pidgeon, the Lib Dem Chair of the GLA's transport committee recently took this up for me with a question to Mayor Johnson, which got the rather disappointing reply below. What's surprising is that a few years ago the news agent located inside the station was moved out, and we were told it was because a lift was going to be installed at that point - but it never happened. I'm chasing that one up. And any other bright ideas will be very welcome.

Do you agree that West Hampstead station which sits on both the Jubilee and London Overground lines is a good candidate for being made step free?

Written response from the Mayor

The London Overground and Jubilee line at West Hampstead serve separate stations located approximately 100 metres apart from one another. There is also West Hampstead Thameslink station a little further along West End Lane.

The Thameslink station already offers step-free access and funding towards a step-free access scheme at the Overground station has been secured from the DfT’s Access for All programme. The programme and scope of this work are currently being developed.

Regrettably there is no funding to undertake works at the Tube station. Aside from the funding question, the Underground station would not be an easy location at which to install step-free facilities. This is because the small ticket hall sits on a road bridge above the tracks carrying the Jubilee, Metropolitan and Chiltern lines.  The station is also surrounded by various separately owned properties and there is no space for a lift.

Customers in the West Hampstead area who require a step-free route to central London or need to access the Tube network can use Thameslink services to a number of stations in zone 1 including King’s Cross St Pancras, Farringdon, Blackfriars and London Bridge, all of which are now fully accessible.
Posted by Keith Moffitt at Tuesday, November 27, 2012 No comments:

Camden Council has started a consultation process with local residents about the possible sale of the land behind Dennington House (between Inglewood and Dennington Park Roads)  as part of the Council’s Community Investment Programme. At present the land is used for garages and car parking spaces. Proceeds from the sale would be invested in new homes, existing council homes and community facilities. As yet, we have had no indication of what the land might be used for if sold, which would depend on the plans of the new owner and the granting of planning permission.


You may already have received a letter inviting your views about the consultation or you can find out more information from www.camden.gov.uk/smallsites.
As your local Councillors, we want to be sure that you are aware of this consultation process and to hear your views on the proposal. We will ensure the views of local residents are taken into account by the Council or you may choose to respond to the consultation yourself through post or email.

The closing date for response is midnight on Sunday 2nd December.

Please let us hear your views about this proposal by contacting us on this blog or by email.
Posted by Gillian Risso-Gill at Tuesday, November 06, 2012 No comments: 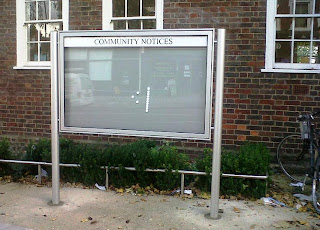 The new community noticeboard that's been installed outside West Hampstead library is the final touch in the popular improvements to the outside of the library first planned a couple of years ago when the Liberal Democrats were running Camden Council.

Regular "area forum" attenders will remember that in those days area forums had a small budget to spend on local projects. One of the ideas the West Hampstead and Fortune Green area forum came up with was to improve the outside of the library, including the new entrance, the benches and a new community notice board.

The steps and benches were done earlier this year, and after I reminded Camden about the noticeboard, it's finally turned up. We're sure that that local groups including West Hampstead Community Centre will welcome the board to advertise their activities, and we will certainly be advertising our councillors' advice surgeries there.


Posted by Keith Moffitt at Saturday, November 03, 2012 No comments: