Camden Council plans to change its recycling service to enable residents to place all their dry recycling (glass, cans, plastics and paper etc.) into one container, rather than multiple boxes and bags and, where appropriate, offer wheelie bins to residents.

Evidence from authorities that have introduced wheelie bins shows that recycling significantly increases. Similar schemes across the country, from a wide variety of authorities, have resulted in significant increases in recycling rates. Through these service changes Camden hopes to drive recycling rates up to 40% and beyond by 2020, reducing both the cost and the carbon impact of the service
As part of these changes, an assessment of properties suitable for wheelie bins was undertaken earlier this year with approximately 20,000 households regarded as having enough space for the wheelie bins which consists of most street properties north of Euston Road. The residents of these households will receive a questionnaire this week asking them for their preferences as well as more general information about recycling. This information will help the Council when ordering the containers and the way to provide communication and engagement work in the future.

The introduction of wheelie bins is a key tool for Camden to increase the amount that is recycled and reduce rising waste disposal costs. As well as the questionnaire there will also be a number of roadshows where residents will be able to see the wheelie bins for themselves and ask officers any questions about the recycling service changes.

The roadshow is coming to West Hampstead Library on 2nd November from 11.30am to 2pm.

The questionnaire, FAQ’s and other relevant information is available at https://consultations.wearecamden.org/communications-strategy-improvement/recyclingchanges/consult_view.

If residents have any concerns about the new arrangements, please contact your local Ward Councillors.

Posted by Gillian Risso-Gill at Monday, October 15, 2012 No comments:

After four sunny Saturday's, the West Hampstead Farmers' Market has proved a great addition to the area.  Launched on 22nd September 2012 and open every Saturday from 10am to 2pm, the market offers a wide range of produce that is not normally available in a city.  Meat, fish, pies, game, eggs, vegetables, fruit, cheese, bread and cakes, pasta and flowers all tempt shoppers.  London Farmers' Markets say it was their most successful launch to date and well worth the three year wait to fnally come to West Hampstead.  Their survey of shows that most of the shoppers are local residents.  But it is wise to shop early, as many stalls sell out well before closing time.

Shops and cafes in West End Lane and in the local streets have said that the market has boosted their trade and some are planning their own promotions linked into the market.  Good to have a positive business story in these harsh economic times. 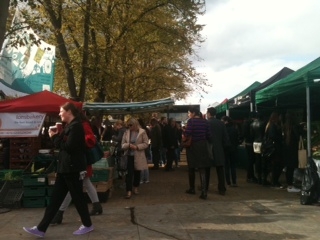 Letter about performance of Camden Council to local press

This is the full text of my letter about declining standards in Camden's performance recently published in both our local newspapers, the Ham & High and the Camden New Journal:

Camden residents are increasingly telling me that the Council is a very different authority to the one that was rated top in the country just four years ago. Here are a few examples of a serious decline in standards:

-          Complaints made by residents online are disappearing into a black hole and going unanswered – Camden have said it may take up to six months to sort this out;
-          There have been numerous cases of car owners not receiving reminders to renew their parking permits and still being harshly punished when they don’t renew on time;
-          The opening of the new Academy and special school on Adelaide Road has been severely delayed, as has that of Emmanuel School in West Hampstead;
-          Camden forgot to post letters to tenants and leaseholders who use the housing office at 156 West End Lane that the office is due to close this month – resulting in a last-moment and wasteful rush to get letters out by first class post.

These are just a few cases of Camden letting down residents – who pay a very high Council tax.

Yes, this is a tough time for local councils who are having to find savings. I understand that this is bound to have an impact on staff morale, so this is a time for strong leadership in Camden.

Instead, the ruling Labour party seems to be more obsessed with its internal power struggles than in running Camden as its residents deserve. It’s not surprising that there are so many failings in services when there has been so much squabbling at the top. In the last two years we’ve seen a change of leader, a new chief executive, four different people responsible for schools and young people’s services and three different councillors in charge of waste collection and recycling.

At national level, Labour have the luxury of criticising the government at every turn without saying what they would do instead. When they are in charge, as here in Camden, they seem to be making a hash of it.

Cllr Keith Moffitt
Leader of the Opposition and of Camden Liberal Democrat Group
Posted by Keith Moffitt at Friday, October 12, 2012 No comments: